Have you just returned from a short holiday or a weekend break and found so many surprises greeting you in your allotment or garden? Courgettes that weren’t there before are now nearly full sized marrows, tomatoes split from the excessive rainwater, and a complete new scene of flowers, (and weeds!). Well that is what I encountered when returning from a weekend in the Mediterranean.
Out of all the jobs that were waiting for me, the most important one that I found time to do on the first day of my return was to tend to my vines.
As you drive through Italy or the South of France you fly past the rolling hills with thousands of small vines planted in long neat rows  – and that is why the English fail at growing grapes. A vine must not be left to its own devices, it must be pruned regularly many times during the year otherwise you will be left with scrambling 30ft greenery and no grapes.

Grape Vines Can Prosper in the UK, Even Further North

Many grape varieties would prosper in our climate – they love the cold winters, and in most years our summers are warm enough to yield a sizable crop, at least good enough for wine making, especially if grown in a greenhouse.
You don’t have to live in the sunny South, I know of a commercial vineyard as far north as the Welsh English border near Welshpool, but I grow grapes in Greater Manchester both indoors and out and have always been quite successful.
If you have room to grow a vine in a polytunnel or a greenhouse – it is still advisable to plant it outside the structure, and feed the branches inside as the roots love the moisture only found outside.
Many people read books about complex vine pruning and that puts them off growing vines for life, so let us simplify the cutting edge : –

Pruning begins in early winter (to avoid the vine bleeding). The text books advise you to leave pencil thick branches but I would advise to cut those away as well, especially once the vine is over 5 years old. I would only leave  branches that are at least as thick as a permanent marker. Don’t worry if you are cutting away so much growth – you practically can’t kill a vine! They are so robust! 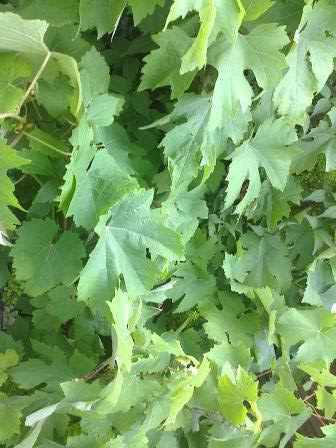 vine before pruning
As the new branches begin growing in late spring the bunches of grapes become visible in the leaf axils, it is again time for pruning – this time leave just one set of leaves above the grape bunches.  However, the vine will continue to put on leaf growth which will have to be removed regularly – this will reveal the bunches of grapes to the eye – as well as to the sun! 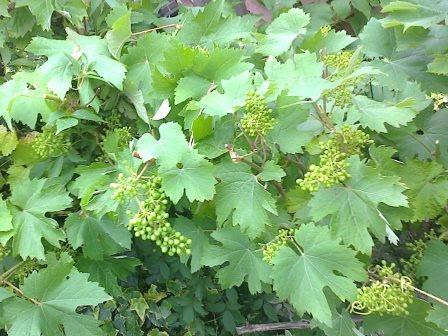 vine after pruning
The next prune is best carried out with a pair of short pointed scissors, ( if you don’t possess the specialist vine tweezers) and this is the cutting away of the actual tiny grapes to give the others more space to grow otherwise you will get a mass of very small grapes on each bunch looking very unprofessional. It is heartbreaking to remove those pea sized grapes but you have to overcome your feelings –  think of those large juicy grapes  you are encouraging or that glass of good wine, unobtainable in any shop! 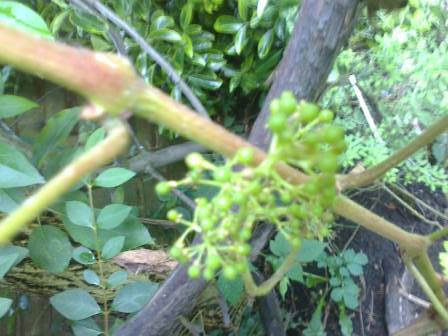 Any misshapen or small bunches like the one in the photo above should be totally removed
Leave the grapes on the vine as long as you can, the longer they stay on the vine the sweeter they become – some wine makers leave them on the vines until they are nearly “raisin like” to give that extra sweetness to their ‘late harvest wine’!
The pleasure of serving guests with a glass of wine from home grown grapes could easily be yours, by following these easy pruning steps.
Good gardening and responsible drinking to all,
Boris

£10 VOUCHER GIVEAWAY!!
Comment on our garden product reviews with your personal experiences.
All published comments will receive a £10 Garden Centre Voucher
Click here for voucher FAQS